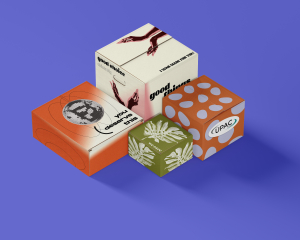 The sponsorship is now the Scottish packaging supplier’s second, after it became the official packaging and print partner for Open Goal Broomhill FC earlier in June.

UPAC will be Hibs’s official packaging partner, with its adverts displayed across the team’s Edinburgh stadium and screens during games.

The marketing push is intended to help UPAC build its brand and reach a wider audience as it expands its offering, according to Melissa Cairney, the firm’s marketing manager.

She told Printweek that this can be difficult because so many of the firm’s products, even mock-ups or designs, are under non-disclosure agreements (NDAs).

She added: “We believe sponsoring both Hibs and Open Goal gives us the opportunity to demonstrate our brand personality, which we believe is different from many of our competitors.”

Cairney highlighted the social media presences of both Open Goal and Hibernian, which each have around 100,000 twitter followers.

UPAC’s partnership with Hibs, which was founded in Edinburgh in 1875, will likewise help the Glasgow firm break into the East Scottish market.

Cairney added: “We’ve got loads of things in the pipeline, and I’m trying my best to build a brand at UPAC, and trying to get the word out there.”

UPAC’s marketing push has come as the company expands its offering: it has just bought a Mimaki JFX200-2513 EX 2.5×1.3m flatbed UV inkjet printer, which was delivered in late June, through a hole freshly cut in its Glasgow site’s wall.

The new Mimaki will allow the company to print with a white or spot UV effect, and on a variety of substrates, from solid board to 50mm wooden panels.

The firm has also bought a new Kongsberg X24 Edge sample producer cutting machine, due to arrive in late July. Together, the two machines and a new graphics/packaging designer will represent a £200,000 investment for UPAC, which turned over around £15m last year.

Cairney said: “We believe this could be game-changing for The UPAC Group, allowing us not only to innovate with different materials, but it really enhances our capabilities on-site making the buying process with us quick and simple.

“It also means we can offer our customers anything packaging related, including banners, adding an extra string to our bow.”

Open Goal’s marketing manager, Michael Pentland, said the club was delighted to have UPAC as one of its first official partners, calling the company “an ambitious, innovative, and creative team.”

Open Goal was founded in 2014 as Broomhill FC, with ex-professional and podcast host Simon Ferry taking up managership in preparation for the 2022/2023 season.

Cairney added: “We understand this may be considered a risky investment, but with the drive and determination of both clubs – Hibs a long-established Scottish football club with an ambitious and progressive outlook, and the trailblazers at Open Goal, we believe we are going to become a household name in no time at all.”