What Cardboard Shortage? Use Second-Hand Boxes! - The UPAC Group

What Cardboard Shortage? Use Second-Hand Boxes!

As the packaging industry reports unprecedented increases in cardboard prices and shortages become the norm, The UPAC Group have never been so busy! WM Watsons Packaging and Scotia Surplus Boxes have come together under one roof to keep the wheels of industry turning with second-hand boxes.

Who are Scotia Surplus Boxes?

Billy started work with W&M Watson 40 years ago in the warehouse selecting used boxes for resale. ‘WM Watson has been my whole working life, but I have never seen anything like the demand we have now.’ WM Watson buys the used boxes from companies, select those boxes that are re-usable and then resell them. It’s a win/win/win.

Companies that would previously pay to have their waste boxes taken away for disposal, now get paid a premium for the boxes as they are sold as a commodity. Customers get heavily discounted boxes without suffering the frustrations of lead times and price increases, whilst we make a big contribution to saving the planet by re-using the boxes previously earmarked for waste.

‘The greenest thing you can do with a box is re-use it’, says Billy, who takes pride in the company’s eco-friendly offering. ‘Most of my customers would rather save some money (and the planet) than worry about the branding on a box.’ The statement they are making is that you don’t have to have branded boxes to impress your customers and the feedback is that people love it.’

Due to shortages in the cardboard industry driven by the lockdown and online retail, WM Watson have found they are having to expand just to keep pace.

Make Profit From Your Waste Boxes

Scotia Surplus Boxes represent the beating heart of eco packaging solutions and is increasingly becoming the driving force behind the UPAC Group’s growth. ‘For any companies out there, that bale their used cardboard, they need to rethink this approach.’ Says Billy Scott. ‘Why not get paid for the boxes and add a new income stream to your accounts? It doesn’t just make our suppliers extra money, but you are helping hold down the costs of thousands of small home-start businesses that buy these used boxes and save the planet all at the same time.’ It’s hard to argue with that sales pitch!

This article was published by Print Week- View the article here. 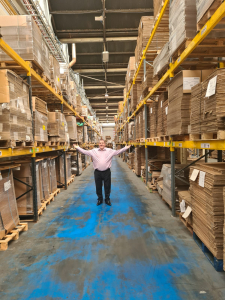